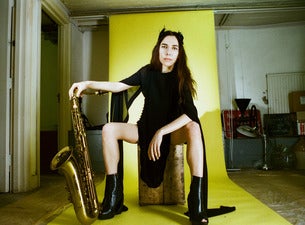 Billions Australia are pleased to announce that PJ Harvey is returning to Australasia in January with her full 10-piece band.

Shows in Perth, Adelaide, Melbourne, Sydney, Auckland, Wellington and Brisbane follow the release of the critically acclaimed album The Hope Six Demolition Project, which hit #1 in the UK album charts. These will be PJ Harvey’s first live dates in Australia and New Zealand since 2012, with a show that is receiving rave reviews from audiences in the US and across Europe.

Review from the New York show

"Right from the first song, PJ Harvey's current live show is a tour de force of beautiful and savage artistry. Her latest album, The Hope Six Demolition Project, reads like an elegy for imperialism, its songs become a dramatic celebration of hope live...By the time the night was done the audience called for an encore, and when that was done, it screamed for another, chanting and clapping until well after Harvey's microphone was removed. The show is that good."

From the outset of her career, the work of PJ Harvey has commanded attention. She formed the eponymous bass/drums/guitar trio in 1991 in Dorset, England and by the autumn had released the debut single 'Dress' on independent label Too Pure. Dry, released the following month was hailed as an astonishing debut album, not just in the UK but worldwide and particularly in the United States, where Rolling Stone magazine named Harvey 'Best Songwriter' and 'Best New Female Singer' of 1992.

In 1993, PJ Harvey signed to Island Records and released her second album Rid Of Me. The album, supported by a lengthy world tour which drew increasingly wide audiences, garnered Harvey her first Mercury Music Prize nomination. The original trio dissolved and Harvey’s solo work '4-Track Demos' was released in the autumn of 1993. To Bring You My Love, an eclectic and starkly original album, followed in 1995, and was accompanied by a tour that saw Harvey explore a more theatrical edge to her live performance. She received her second Mercury Music Prize nomination, two Grammy Award nominations, and 'Artist of the Year' Awards from both Rolling Stone and Spin.

Her fourth album Is This Desire?, released in September 1998, attracted plaudits globally gaining several BRIT and Grammy Award nominations. The much anticipated follow up, Stories From The City, Stories From The Sea, was released in October 2000 and went on to win Harvey’s first Mercury Music Prize. ‘Stories...' was supported by a sold-out worldwide tour. After a summer of live dates, including the first rock concert to be held at London’s Tate Modern gallery, Harvey finished work on her next album Uh Huh Her. The supporting tour saw Harvey perform to sold out rooms in South America for the first time. White Chalk was PJ Harvey's critically-acclaimed seventh studio album, which marked a departure for Harvey as it was composed almost entirely on piano. It was supported by a string of notable solo performances including Manchester International Festival, The Royal Festival Hall, the Hay-On-Wye Festival of Literature, the New Yorker Festival, Sydney Opera House and a performance at Copenhagen Opera House for the Crown Prince couple.

In 2006 'PJ Harvey: The Peel Sessions' was released, a collection of Harvey's recordings for the veteran British broadcaster John Peel, spanning her career to date.

PJ Harvey’s 2011 album, Let England Shake, was created with a cast of musicians and long-standing collaborators Flood, John Parish, and Mick Harvey. The songs focus on both her home country, and events further afield in which it has embroiled itself. The record evokes the troubled spirit of its time, whilst also looking back through our history. Let England Shake won Harvey her second Mercury Music Prize, setting her apart as the only artist to have won the award on two occasions, an achievement recognised by The Guinness Book Of Records. The album was also awarded ‘Album of the Year’ at the 2012 Ivor Novello Awards and was named #1 Album of the Year by numerous publications including The Sunday Times, Los Angeles Times, Mojo, Uncut, Washington Post, The Quietus, The Guardian, NME, Spin, HMV, Sydney Morning Herald, Le Matin, OOR Magazine, Irish Times, Musikexpress, The Independent, The Sunday Telegraph, Stool Pigeon and BBC Music.

Harvey began collaborating on visual projects with respected photojournalist Seamus Murphy in 2011. Murphy, an award-winning photographer, has spent over two decades documenting the world through his lens. His work has taken him to Rwanda, Eritrea, Kosovo, Iran, Afghanistan, Iraq and Syria. 'Let England Shake: 12 Short Films By Seamus Murphy' served as a visual accompaniment to the album, with each track having its own short film.

In 1996 she worked with John Parish on Dance Hall At Louse Point, both an album and a live accompaniment to the Mark Bruce Dance Company production of the same name. The follow-up collaboration with Parish entitled A Woman A Man Walked By, was released in 2009 ahead of an extensive tour of Europe and America. The video for the first single, 'Black Hearted Love', was directed by the acclaimed British artists Jake & Dino Chapman.

In 2009 Harvey composed the soundtrack for renowned Director Ian Rickson’s New York production of 'Hedda Gabler’. They worked together again in 2011 on the music for Ophelia in ‘Hamlet’ at the Young Vic starring Michael Sheen, and more recently collaborated to score the music for his highly acclaimed 2014 production of ‘Electra’ at The Old Vic starring Kristin Scott Thomas.

PJ Harvey contributed original music to the soundtrack for Mark Cousins’ film ‘What’s This Film Called Love?’ as well as for BBC television series ‘Peaky Blinders’ starring Cillian Murphy, and BBC Radio 4 Drama productions ‘Eurydice and Orpheus’ by Simon Armitage and ‘Orpheus and Eurydice’ by Linda Marshall Griffiths. Other projects have included soundtrack work on the films 'Basquiat' by Julian Schnabel, 'Stella Does Tricks' by Coky Giedroyc, 'The Cradle Will Rock' by Tim Robbins and 'Six Feet Under'.

PJ Harvey also appeared as Mary Magdalene in Hal Hartley’s movie 'The Book of Life' in 1999.

Harvey made a guest appearance on BBC1’s Andrew Marr Show in May 2010, the week before the UK General Election. She was interviewed by Marr and performed 'Let England Shake' in front of Marr’s other guest, the then Prime Minister, Gordon Brown. She was invited back on the show in April 2011 alongside Brown’s successor, Prime Minister David Cameron, and performed the song ‘The Last Living Rose’.

A multi-instrumentalist, PJ Harvey is primarily a vocalist and guitarist while also an accomplished player of the autoharp. In addition to her musical career Harvey paints, draws, sculpts, and writes poetry.

In August 2013 PJ Harvey released a new song, 'Shaker Aamer', to highlight the detention of the then last British resident held without trial inside the US prison at Guantánamo Bay. The track was streamed exclusively on The Guardian’s website and received positive worldwide attention.

She gave her debut public poetry reading at the British Library, and was a guest editor on BBC Radio 4's Today Programme in December 2013. Harvey was also awarded an MBE for services to music. In 2014 she was awarded an Honorary Degree in Music by Goldsmiths University.

PJ Harvey’s first collection of poetry titled The Hollow of the Hand, in collaboration with photographer Seamus Murphy, was published by Bloomsbury UK in October 2015. To celebrate the release Harvey and Murphy presented The Hollow of the Hand show - an evening of poems, new songs, images and conversation – two sold out nights at the Southbank Centre’s Royal Festival Hall as part of the London Literature Festival 2015.

On 4th November 2015, PJ Harvey appeared alongside Irish poet Paul Muldoon in a new experimental series of ‘in conversation’ style evenings called ‘Soundings at the Byre’, created by the University of St. Andrews’ new International Writer in Residence, Reif Larsen, and Professor of English, Don Paterson.

In 2016, PJ Harvey released her ninth studio album, The Hope Six Demolition Project, documenting a unique artistic journey, which took her to Kosovo, Afghanistan and Washington, D.C. The album was recorded during a month-long residency, “Recording in Progress”, in early 2015 at Somerset House during which audiences were given the opportunity to observe Harvey at work with her band and producers in a purpose-built studio housed in the basement of the iconic London building.