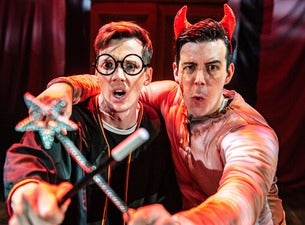 Potted Potter: The Unauthorised Harry Experience – A Parody by Dan and Jeff

Even if you don’t know the difference between a Horcrux and a Hufflepuff, this brilliant comedy will make you roar with laughter. This show is perfect for ages six to Dumbledore (who is very old indeed).

“Inventive, daft fun for all the family. A winner in every way.” The London Guardian

“Casts the perfect spell over the audience.” The New York Times – Critics’ Pick