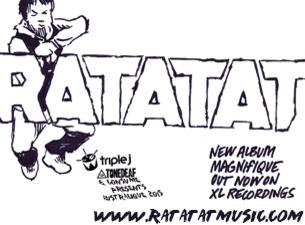 Rocktronica duo Ratatat is a favorite of headbangers and ravers alike thanks to their irresistible mix of colossal riffs and booming beats. Mike Stroud’s six-string heroics and Queen-inspired guitar harmonies perfectly complement the band’s sci-fi synthesizers, and Evan Mast’s thunderous, booming basslines on fan favorites like “Loud Pipes” and “Shiller” always get ticket buyers shaking their moneymakers on the dance floor. In addition to plenty of funky jams, the duo treats audiences to a visual spectacle as psychedelic graphics and laser lights dance across projection screens. Fans that like to rock until the break of dawn and dance the night away will find plenty to love every time Ratatat bring their thumping grooves on tour.

Evan Mast (bass/synth/percussion/production) and Mike Stroud (guitar/synth/percussion) originally met as students at Skidmore College in Saratoga Springs, NY, but they didn’t begin collaborating on music together until 2001. Using Mast’s production equipment and Brooklyn apartment as their home base, Ratatat independently recorded and released their self-titled debut in 2004. The album helped the band land opening spots for artists as diverse as Björk, Daft Punk, Vampire Weekend, and The Killers. The band picked up even more steam by appearing at popular music festivals and releasing their sophomore outing Classics in 2006. Their next three albums -- LP3 (2008), LP4 (2010), and Magnifique (2015) -- all cracked the Billboard 200, and the band’s fanatical following continued to grow. Ratatat continue to please rock and electronica enthusiasts around the globe with their amazing musicianship, top-notch productions, and psychedelic stage shows.