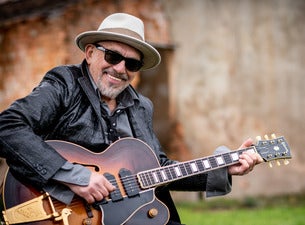 Writer of milestone Australian songs such as So Young, Hit And Run, Shape I’m In, Hold On To Me, Harley and Rose, Chained To The Wheel, Never Let Me Go and the Chosen Ones, Joe Camilleri’s music has become part of Australian music culture. As a member of Jo Jo Zep and The Falcons, Joe was inducted into the ARIA Hall of Fame in 2007. Camilleri has shown fans and critics alike that he is a performer with an undeniable energy and love of it all.

In November 1993 the band collaborated with Jimmy Barnes and recorded “The Weight” which resulted in a Top 5 chart debut. Eighteen months later “Get On Board” was nominated again for Highest Selling Album at the 1995 ARIA Awards.

Michael Vdelli, frontman and namesake of the band VDELLI, first picked up a guitar when he was 13 years old. Locking himself in his room and learning how to play from listening to the radio, Michael has since become one of the leading exponents of his art in the world. Combine this with his raw yet captivating vocals, Michael’s stage presence and energy continue to mesmerize audiences around the globe.

Joining Michael on the stage, are internationally renowned musicians, Ric Whittle on drums and Tony Gibbs on bass who both have a string of accolades to their names. Together, this dynamic trio is a musical tour de force!

"MATTY T WALL, AN EXTRAORDINARY BLUES-ROCK GUITAR PLAYER, SINGER, SONGWRITER. ECHOES & ELEMENTS OF ROCK FROM THE 60’S, BUT WALL’S VOICE HURLS IT INTO THE 21STCENTURY, HIS DAZZLING GUITAR LICKS AND SOLOS NOT OF THIS WORLD. WALL IS ENTITLED TO A LITTLE SWAGGER—HE HAS THE CHOPS TO PULL IT OFF. EXTRAORDINARY GUITAR PLAYER. JAZZ FLAVORS, SOUL. GRITTY BLUES-ROCK, ROCK & ROLL, WITH OUTSTANDING MUSICIANSHIP."

Australia’s Ultimate Creedence Clearwater Revival Tribute Band PROUD MARY, share their authentic show honouring the swampy sounds of one of the 60s and 70s best rock acts in full concert style featuring former members of 5 time Aria award winning band The Baby Animals. Proud Mary is a true delight to experience ……don’t miss this chance to hear all CCR’s best tracks like…..Born on the Bayou, Up Around The Bend, Down On the Corner, Have you ever seen the rain, Looking out my backdoor, Lodi, Green River , Who'll stop the rain, Heard it through the Grapevine, Bad Moon Rising, Suzie Q, Hey Tonight ,Travelling Band, Fortunate Son, Midnight Special & more