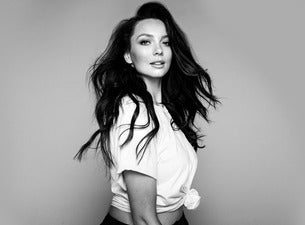 RICKI-LEE is one of Australia’s most loved popstars. She became a household name in 2004 when she appeared on Australian Idol – and has since gone on to become a multi-platinum selling ARIA award nominated singer/songwriter, selling over 1 Million records to date and generating more than 25 million streams and views of her music & videos.

She’s had 2x #1s on the ARIA chart, a #1 on the UK Club Chart, reached #7 on Japan’s Billboard Hot 100 chart – and has released 3x Top 10 albums and 3x Top 40 albums with 7x Top 10 singles and another 8x Top 40 singles on the ARIA Charts. She has been nominated for the prestigious ARIA Award for Song Of The Year, and her songs have featured in Hollywood blockbuster films like Sex & The City 2. As a recording artist her releases have achieved 5x Gold, 4x Platinum and 2x Double Platinum certifications and she has toured with some of the biggest artists in the world including Jason Derulo and the Backstreet Boys as well as her own sold out tours around Australia and Japan.

She has well and truly turned her 15 minutes of fame into a successful 15-year career. So, in celebration of her first 15 years in the music business – Ricki-Lee will be performing in a special 2 hour concert at The Palms at Crown in Melbourne. The first part of the concert will feature songs from the Golden Globe winning & Oscar nominated film A Star Is Born. The second part of the show will see Ricki-Lee take a trip down memory lane, performing songs that were defining moments for her on Australian Idol including ‘I Have Nothing’, ‘Proud Mary’ and ‘Don’t Stop Til You Get Enough’ - as well as her massive hits ‘Can’t Touch it’, ‘Do It Like That’, ‘Raining Diamonds’, ‘This Time I Know It’s For Real’, ‘Sunshine’ & ‘Not Too Late’.

Much like Lady Gaga’s character in A Star Is Born – Ricki-Lee was discovered in the most unlikely of places; her lounge room, when she got up to sing with the band at her dad’s birthday party. The band immediately asked if she would do some shows with them – so at the age of 15, she began performing around her home town of the Gold Coast, and just three years later her life changed when she appeared on Australian Idol. After watching the film Ricki-Lee said “I was so emotional when I saw the movie - not just because of the music and the tragic romance of the film, but also the parallels that I drew to the path that Ally’s character took in making her entrance into the music industry. Because for me it was very similar – all it took was one person to see me and believe in me and give me a shot, and then the rest was history. One minute you’re living your life, and the next minute you’re thrust onto a stage in front of all these people – and all of a sudden everyone knows your name and your whole world is turned upside down. This movie really spoke to me on a deeply personal level.”

Not just a fan of the movie – Ricki-Lee says “I’m such a huge fan of Lady Gaga, both as a songwriter and an artist. She has such an incredible voice and to me, these songs have become new classics.” Speaking of the songs in the film, she says “I haven’t been able to get the songs out of my head since I first heard them. I’ve been singing them every day around the house, and in the car or the shower. My husband plays the songs on guitar at home and we sing them together– and I swear, I cry every time he sings Bradley Cooper’s part in ‘I’ll Never Love Again’! I cry every time I listen to that song, and I bawl my eyes out every time I watch the movie – so I think I’m going to struggle to get through it without crying on stage! This film and these songs really stir something up inside of me - so I’m really looking forward to performing these songs live!”