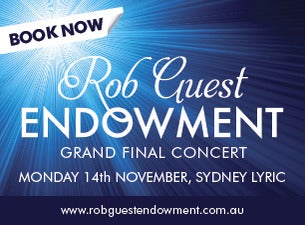 The Rob Guest Endowment Grand Final Concert will be a night of exhilarating musical entertainment as six young musical theatre artists perform live and compete to win the $20,000 cash prize in this grand final event.

Hosted by Lucy Durack and Penny McNamee, they will perform alongside some of Australia’s most loved stars including Paulini, principal cast members of Aladdin, the Helpmann Award-winning Molly Barwick, Sasha Rose, Georgia Taplin and Bella Thomas who originated the role of Matilda in Australia, and cast members from Dream Lover – The Bobby Darin Musical. Be there as the industry comes together for an incredible night not to be missed. One night only and only in Sydney. Be part of something extraordinary.