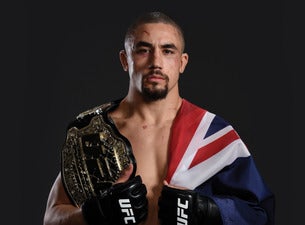 “UP CLOSE AND PERSONAL”

In November 2019, UFC Middleweight Champion Robert Whittaker will embark on his first national speaking tour of Australia and New Zealand. Take this rare opportunity to get up close and personal with Rob as he discusses his approach to the Octagon, his recent clashes with and the personal journey that has led him to become one of the world’s most respected mixed martial artists.

In addition, 100 people at each show will be able to purchase exclusive VIP tickets to “The Reaper Pit”, which gives them:

- Meet and greet with Rob

- Photos with Rob and the Champions UFC belt

Robert Whittaker is the undisputed UFC Middleweight Champion. The poster boy of Mixed Martial Arts in Australia and New Zealand, Rob is regarded as one of the premier athletes of his time.