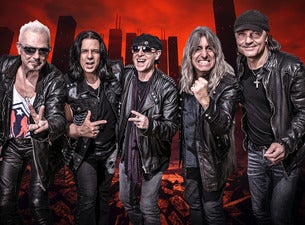 German band Scorpions has been electrifying audiences since the early ‘70s with their signature hard-rocking melodic metal and power ballads. With the 2010 release of their 17th studio album Sting in the Tail, the band proved that age had far but mellowed them, kicking off another high-energy tour that has fans eagerly awaiting the chance to see them in 2014.

“What a blistering, incredible and energetic concert the Scorpions put on tonight. Wailing guitar riffs and solos, thundering rhythms, and of course Klaus Meine's signature, crystal clear, high tenor voice soaring across the arena…Tonight the teenage boy in me returned for one last concert with my favorite band ever.”

“The Scorps sounded AWESOME and the energy was AWESOME. They were having so much fun on stage and it showed…They were very interactive with their fans by throwing guitar picks and drumsticks whenever they had the chance!”

“This band still sounds amazing, and their body of work is awesome…They put on a great show as always and I would love to see them again!”

Scorpions are one of the most successful European bands in music history, having sold over 100 million albums worldwide. Formed in 1969, their early hard rock albums gained attention in Europe and Japan, but it wasn’t until they dropped more radio-friendly albums like 1982's Blackout and 1984's Love At First Sting that they found international fame. Over the years the band has developed a reputation for being an outstanding live act, with Klaus Meine delivering some of the most pitch-perfect live vocals in the history of rock.