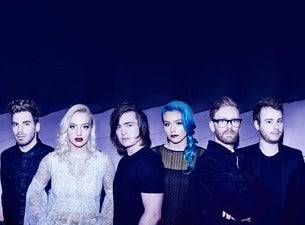 Sheppard's uplifting, anthemic pop is full of heart, hooks and harmonies — and they bring it all to the stage with unmatched charm and energy. The sextet from Brisbane, Australia, were first a family affair between musical siblings Amy and George Sheppard. In 2009, Amy was enrolled in a music course and asked George to help with a song she wrote for an assignment. Over the next two years, the two kept experimenting with their sound, with George on piano and both on vocals. Soon enough, youngest sister Emma wanted in on the fun and offered up her skills on bass. The band quickly expanded from there, with rhythm guitarist Jay Bovino, lead guitarist Michael Butler and drummer Jared Tredly (replaced by Dean Gordon in 2013) joining the ranks.

In 2012, the six-piece dropped their first release, a self-titled EP. With a little help from family — this time Jay's brother — the EP made its way to TV host David Campbell, who invited the band to play on his show Mornings. This immediately brought them attention in their home country, which eventually spread internationally as they soon landed slots on festivals in the U.S. and U.K. It wasn't until 2013, though, that the EP's lead single, "Let Me Down Easy," hit the Australian charts and led to a nomination for an ARIA (Australian Recording Industry Association) Music Award and a World Music Award for World's Best Song and World's Best Video.

Sheppard kept the hype going into 2014 with the release of their debut album, Bombs Away. Its lead single, the heart-pumping alt-pop anthem "Geronimo," scored them their first No. 1 hit in Australia and eventually made it on the charts in the U.S. and several other countries around the world. This lead to an ARIA win for Best Group, and a spot as opener for Meghan Trainor on her 2015 North American tour. They'd also go on to support Justin Bieber and Little Mix, before releasing their sophomore album, Watching the Sky, in 2018. The album topped the Australian charts and took them back out on the road for an extensive headlining tour.