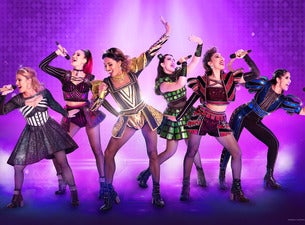 About Six: The Musical

Think you know the six wives of Henry the VIII? Not anymore.

From Tudor Queens to Pop Princesses, these six rebellious heroines of history take to the mic to tell their tales, remixing five hundred years of historical heartbreak into a 75-minute celebration of 21st century girl power.

Get to know six fierce women; Aragon, Boleyn, Seymour, Cleves, Howard and Parr. Their electrifying performances are packed with lyrics so witty and harmonies so tight, they need to be heard to be believed.

Inspired by the queens of pop from Beyoncé to Britney, Ariana to Adele and more, this intoxicating Tudor take-off has a soundtrack that is storming up the UK pop-charts and just passed 100 million streams globally.

These Queens may have green sleeves but their lipstick is rebellious red.

‘DO YOURSELF A FAVOUR AND GO PARTY AT SIX. YOU WON’T REGRET IT’ Attitude

‘Must see show of the summer...shiny and loud and fast and funny’ SYDNEY MORNING HERALD

‘All Hail...a riotous explosion of wit that speaks strongly and vibrantly to today’ VOGUE MAGAZINE USA