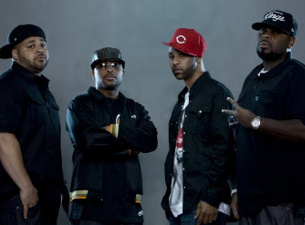 2013 is off to a massive start for hip-hop fans with Shady Records super-group Slaughterhouse, touching down in Australia for the very first time in 3 weeks with shows commencing Saturday 23rd February.  The group consisting of four of the most prolific lyricists the rap game has ever seen in Detroit’s Royce da 5’ 9,’ New Jersey’s Joe Budden, Long Beach, California’s Crooked I and Brooklyn’s Joell Ortiz, have been steadily touring the USA and Europe in 2012 to packed houses and phenomenal reviews. Joining the super-group is Australian Hip Hop group Full Tote Odds, whose debut album “Place Your Bets” has recently been released on Obese Records.

Joining the tour will be some of Australia's finest DJ's and local supports (artists to be announced soon). DJ Line up confirmed as:

Due to recording commitments, ScHoolboy Q will no longer be appearing and is rescheduling his Australian shows, with new dates TBA.