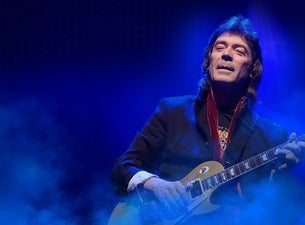 A Steve Hackett show can conjure rock's potential for grandeur and glory. As a guitar hero who made his bones defining the sound of Genesis in the salad days of progressive rock, Hackett learned a thing or two about how to stage a show and how to fill it with elegant, carefully constructed melodies. Of course, he's maintained a long, rich solo career since leaving Genesis, but his legacy with the band is an undeniable part of who he is, so his shows tend to feature a combination of material from his solo albums and Genesis classics as well. And since his music is technically demanding, every tour finds Hackett backed by a top-tier crew of musicians, helping to bring his complex — but entirely accessible — compositions to life on the stage. It's a show that brings heady visions of prog rock's luminous past, but still feels completely relevant to the current moment.

As the lead guitarist for Genesis from 1971's Nursery Cryme through 1976's Wind & Wuthering, Steve Hackett was crucial to creating the template not only for the legendary British band but for progressive rock as a whole. In the spirit of the genre's adventurous approach, Hackett developed a sound unlike anything that had been heard in rock before, something simultaneously liquid and visceral. He released his first solo album, Voyage of the Acolyte, in 1975, and it became a prog classic in its own right. After leaving Genesis, he leaped with both feet into his solo career, and he hasn't stopped creating commanding music ever since. Along the way, Hackett has also taken time to collaborate with stellar peers such as Yes bassist Chris Squire (with whom he formed the duo Squackett), Yes guitarist Steve Howe (in supergroup GTR) and Alan Parsons. But he's always tended his own musical vision first and foremost, maintaining his status as a prog rock guitar hero in perpetuity.