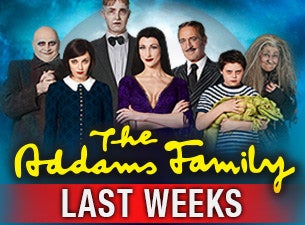 About The Addams Family (Australia)

The Addams Family, Broadway’s smash hit musical comedy will make its Australian premiere in Sydney in March 2013 at the Capitol Theatre.
The Addams Family brings the deliriously delightful world of Gomez, Morticia, Uncle Fester, Grandma, Wednesday, Pugsley and Lurch to spooky and spectacular life.
Starring John Waters, Chloё Dallimore and Russell Dykstra, The Addams Family features an original story and it’s every father’s nightmare. Wednesday Addams, the ultimate princess of darkness, has grown up and fallen in love with a sweet, smart young man from a respectable family.  And if that weren’t upsetting enough, she confides in her father and begs him not to tell her mother. Now, Gomez Addams must do something he’s never done before - keep a secret from his beloved wife, Morticia. Everything will change for the whole family on the fateful night they host a dinner for Wednesday’s “normal” boyfriend and his parents.