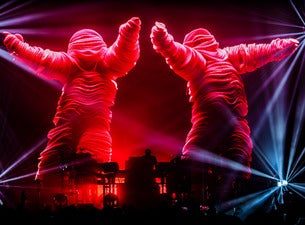 About The Chemical Brothers

Frontier Touring are thrilled to confirm that The Chemical Brothers will bring their No Geography Live 2019 show — widely praised as one of the best in the world — to Australia later this year. In their first visit to our shores since 2013, the all-conquering electronic duo will perform shows in Sydney, Melbourne, and Brisbane this October and November.

The Chemical Brothers, Tom Rowlands and Ed Simons, have sold more than 12 million albums and six million singles worldwide over the course of their illustrious career. They have had six #1 albums in the UK, and were the first electronic act ever to receive a Grammy, taking home Best Rock Instrumental Performance for ‘Block Rockin’ Beats’ in 1998. They’ve since taken home three more Grammys.

The Chemical Brothers’ ninth studio album No Geography has just been released through EMI Music Australia. The follow up to 2015’s Grammy-nominated Born In The Echoes (the band’s sixth consecutive #1 album), it features the three blistering singles ‘Free Yourself’ ,‘M.A.H.’ , and ‘Got To Keep On’. No Geography has been hailed as their finest album since 1999 classic, Surrender.

The songs were road-tested in their 2018 live set, including two sold-out shows at Alexandra Palace - their biggest UK headline shows to date - and honed in DJ sets around the world.

‘Got To Keep On’ has been at the heart of The Chemical Brothers’ live shows over the last year or so, and will continue to feature alongside classics from their 25 year career as the band take on dates in the US, Europe, and the UK before landing in Australia in November.

The Chemical Brothers’ visuals have always been central to their music, and this record is no exception. Already live favourites, ‘Got To Keep On’ , ‘Free Yourself’ , and ‘M.A.H.’ (for which the video was shot at their recent sold-out London shows at Alexandra Palace) contain visuals created by Adam Smith & Marcus Lyall. Eight years since they last performed live in Australia, The Chemical Brothers are set to return with a show that’s become a more dynamic and relevant experience than ever, both sonically and visually!

No Geography is a return to the conditions that spawned their early hits. They built a studiowithin a studio, a tiny room filled with gear that had sat gathering dust in Tom’s attic for the last twenty years. Using the equipment with which they recorded the bulk of their first two albums, they found the freedom to create music in a way they hadn’t for years, embracing randomness and jagged edges, building songs around vocal samples like the snatches of dialogue they found in the late ‘60s experimental Dial-A-Poem project. Several tracks feature vocals from Norwegian artist Aurora and Japanese rapper Nene also makes an appearance.

The Avalanches (DJ set) will be joining The Chemical Brothers as special guests for all dates. The iconic Australian duo are considered to be one of the most influential acts in dance music, with their debut record Since I Left You (2000) laying a blueprint for sample-based music in the 21st century, before their long-awaited 2016 follow-up Wildflower once again blew the world away.

From intimate clubs to headline slots at some of the world’s biggest festivals like Splendour In The Grass, Primavera, and Creamfields, The Avalanches’ DJ sets are lauded as masterpieces in a realm of music flooded with imitators. The Avalanches are the perfect accompaniment for fellow dance legends The Chemical Brothers.