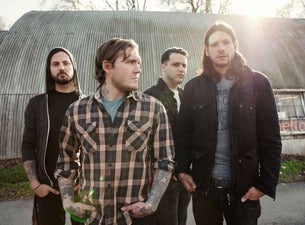 About The Gaslight Anthem

American rockers THE GASLIGHT ANTHEM return to Australia for four pulsating shows in January and February 2015.

"So few hoist the flag of rock 'n' roll as proudly and explicitly as The Gaslight Anthem these days." - Alternative Press.

With five successful studio albums under their belts, latest offering ‘Get Hurt’ landed the band their highest ARIA chart debut to date. Clash Magazine hailing it as "Rock ‘n’ roll of the purest kind". Lead single ‘Rollin’ and Tumblin’ is a raw, stripped back rock ‘n roll anthem that solidifies them as a true rock ‘n roll band at the very top of their game.

No stranger to blowing away audiences on the stages at some of the most iconic stadiums in the world - punters are certain to be fighting tooth and nail to witness one of the world's most prolific rock acts this summer. "They are an immensely thrilling live experience, overwhelming any cynicism with a breathless set of effervescent, life-affirming rock'n'roll songs that deal only in heartbreak or giddy delight." – The Guardian.

Local fans are still basking in the glory of their last run down under. "With each tour of Australia, the size of the venue increases.... it's a testament to a band that write honest rock 'n' roll songs and play with a passion that reaches into the core of their fans." - The AU Review.

The power and appeal of THE GASLIGHT ANTHEM transcends beyond the fans and critics. Ever since he jumped on stage with them at Glastonbury in 2009 (and a few more occasions after that), Bruce Springsteen has been charmed by the on-stage presence and passion of his fellow New Jerseans.