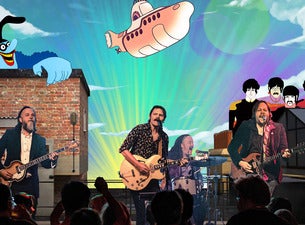 On a freezing cold winter’s day in 1969, The Beatles added yet another iconic chapter to the folklore of rock ’n’ roll history with their last ever live performance - THE ROOFTOP CONCERT.

Perched high upon the roof of their Apple business headquarters in downtown London, The Beatles were back to the raw power of their rock ’n’ roll best, delighting an unsuspecting crowd with their new songs ‘Get Back’, ‘Don’t Let Me Down’, ‘I’ve Got a Feeling’ and more. With a little help from their friend Billy Preston on keys, John, Paul, George and Ringo showed the world, yet again, why they were the greatest band of all time.

The Honey Sliders are bringing The Rooftop Concert back to life, along with an extended set of Beatles’ hits and rarities, all in front of a dazzling movie projection at THE PRINCESS THEATRE, on 17th September 2022. Doors open at 7pm and the show starts at 8pm.

Far from being Beatles impersonators, The Honey Sliders are a band made up of some of the most respected musicians in Australia, including the multiple award-winning Danny Widdicombe (The Wilson Pickers, Bernard Fanning, Tim Rogers, Shane Nicholson), Dan Mansfield (You Am I, Gin Club), Bos Borley (Bernard Fanning, The Resin Dogs), and Ben Carstens (Mexico City).

The Honey Sliders meticulously recreate these songs that have touched the hearts of so many people around the world. THE ROOFTOP CONCERT is a celebration of the positive impact The Beatles had across the universe. Something in the way their music lives on through the ages is testament to their boundless creativity. Come and be part of this magical mystery musical celebration of The Beatles.