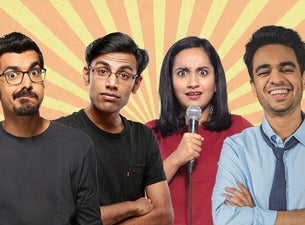 About The Indian All-Star Comedy Showcase

A red-hot showcase of Indian A-List superstars! Returning for its fourth year, this limited-run season shines a bright light on the best comedians India has to offer. With stars from All India Bakchod and East India Comedy and clocking a combined 63 million views on YouTube, don’t miss this Australian exclusive LIVE in Melbourne.

Among the first to enter the Indian stand-up scene in 2009, Rohan is one of the circuit’s most recognisable faces. An original member of All India Bakchod (AIB), Rohan’s first stand-up special, Wake N' Bake, was released on Amazon Prime Video in January 2020 to critical acclaim.

One of the most popular comedians in India, Biswa is a furiously funny nerd bringing a unique perspective into comedy using mathematics, language and life. Biswa will rant about the things that irritate him, instead of going to therapy. Also performing a solo show in Hindi.

One of India's most critically acclaimed stand-ups, Azeem’s material has evolved from intelligent observations to politically charged social commentary and dark humour. He has two stand-up specials on Amazon Prime Video and is a part of Indian YouTube collective East India Comedy.

Urooj is a 24-year old stand-up comedian and writer from Bombay who’s making waves on the comedy circuit. Known for her dark sense of humour, Urooj was a contestant on Queens Of Comedy, hosted Comicstaan Season Two and has written for projects such as Son of Abish and Better Life Foundation.