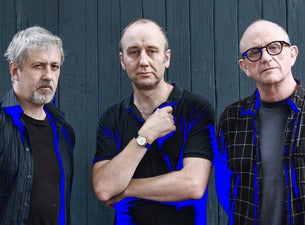 “The greatest trio on Earth” is how the New York Times described The Necks — Australia’s improvisational conjurors. You could say The Necks play jazz, but just like that big swing from the NYT, that description would be too simple. Typically performing two, extended and improvised pieces, their modal jazz prises open tectonic plates and unknown realms, before elevating the audience to a higher ground.

As RISING’s band In Residency, The Necks perform across multiple venues and formats—their only shows in the world in over a year. As a unit, they send piano, drums, percussion and bass strings swirling around the Comedy Theatre; and provide an escalating, dramatic live score to Back to Back Theatre’s restaging of its seminal work Food Court [blue dot]. And in solo performances, band members Chris Abrahams [blue dot] and Tony Buck [blue dot] will play the Melbourne Recital Centre.

Post-genre, never still, always changing, The Necks are a world unto themselves.