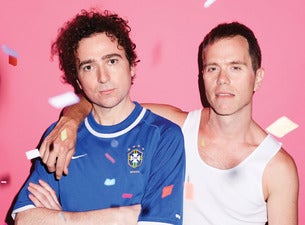 Having played nearly every big festival from Glastonbury to Coachella, The Presets are recognised worldwide for their dynamic live performances. In 2008 they released the chart-topping Apocalypso, selling in excess of Triple Platinum and featuring four hit singles, including the classic ‘My People’. Setting new standards for dance music in Australia, The Presets went on to win 5 ARIA awards (and 2 ARIA Artisan Awards) including Album of the Year, as well as the J Award and FBI SMAC Award for Album of The Year. Kim and Julian also shared the coveted Songwriter of The Year Award at the 2009 APRA Awards.

The duo are coming off a massive year following the release of their Australian Music Prize-nominated fourth album HI VIZ so it’ll be Tools Down when the heat is on come January 3, February 1 and 15. The band are currently gearing up for the release of the collaborative RAKA EP with Golden Features.