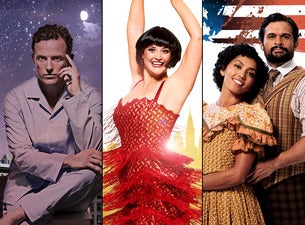 About The Production Company

The Season begins in May with the Australian premiere of the David Bowie and Enda Walsh musical, Lazarus.  Inspired by The Man Who Fell to Earth, Lazarus is a groundbreaking piece of music theatre.  Starring Chris Ryan and iOTA, and featuring 18 David Bowie songs including Changes, Heroes and Absolute Beginners, Lazarus is directed by Michael Kantor.

In August, take a fun-filled ride into the heart of the roaring twenties with Thoroughly Modern Millie! Starring Annie Aitken as Millie Dillmount, a small-town girl who lands in New York City ready to make her dreams come true.  Australia’s favourite leading lady Marina Prior is Mrs Meers – a dragon land-lady audiences will love to hate – and also starring Michael Falzon and Claire Lyon. Thoroughly Modern Millie is based on the 1967 Academy Award-winning film and won six Tony Awards, including Best Musical.

And in November, don’t miss Ragtime, a sweeping musical portrait of early 20th century America based on the best-selling book by E. L. Doctorow. With a Tony Award-winning book and score, Ragtime stars Kurt Kansley, Josh Piterman and Chloe Zuel. Ragtime bursts to life with music that will sweep you off your feet and a story that will break your heart.

There’s no better time to subscribe to The Production Company to see all three shows from the best seats and save. A record number subscribed to the 2018 Season, and this new season has all the ingredients to make it the most exciting ever.