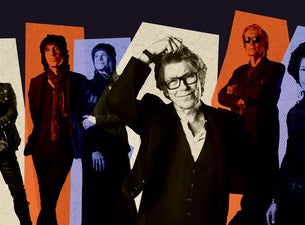 Alternative rock icons The Psychedelic Furs have announced the ‘Made Of Rain’ tour, including a show at Anita’s Theatre in Wollongong this November.

The band also joins the bill for The Icehouse ‘Great Southern Land 2022 Concert Series’ at the Sidney Myer Music Bowl in Melbourne and the Brisbane Riverstage.

Bursting out of the English post punk music scene in the early eighties, The Psychedelic Furs released eight critically acclaimed studio albums including 2020’s ‘Made Of Rain’ co-produced with Richard Fortus of ‘Guns n’ Roses’, and had worldwide hits with the title track to the John Hughes seminal film ‘Pretty In Pink’ and their anthemic otherworldly single ‘Love My Way’.

In recent years the band have toured continually across North America, the UK and Europe, playing acclaimed shows at The Hollywood Bowl, All Points East, Hyde Park and Benicàssim, and a celebrated handful of shows including headlining the prestigious Meltdown at the Royal Festival Hall, and a triumphant show earlier this year at the Royal Albert Hall in London.

The last few years has seen the band’s legend growing, highlighted by the fact they have scored nearly 200 million streams of their songs worldwide. Their influence since arriving on the post-punk scorched-earth landscape four decades ago has reverberated and resonated with everyone from The Strokes to The Killers to REM to the Foo Fighters and Bob Dylan. The band also featured on the incredibly popular Netflix series Stranger Things with their 1984 hit song ‘The Ghost In You'.

Join the six-piece line-up featuring lead singer Richard Butler, Tim Butler on bass, Mars Williams on saxophone, Rich Good on guitar, Zack Alford on drums and Amanda Kramer on keyboards as they perform shows across the country on their first visit back to Australia since 2006.