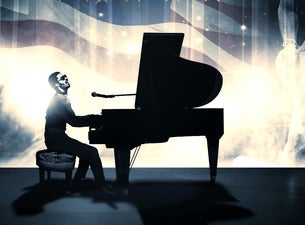 You’ll hear wonderfully authentic renditions of the great classic hits from his songbook, including Superstition, Sir Duke, Higher Ground, Master Blaster, Signed Sealed Delivered, I Wish, Uptight and many many more, as well as an onscreen journey through the cultural moments and movements for which Stevie’s music became the soundtrack.

Featuring a full 9 piece band, this is an incredible line-up of musicians & singers   whose global touring and studio recording credits include, amongst many others  Beyonce, Grace Jones, Amy Winehouse, Alicia Keys, Pharrell Williams, Annie Lennox, Tina Turner, Aretha Franklin The Temptations and yes...Stevie Wonder himself. The band members have between them graced some of the biggest stages around the world including Sydney Opera House, Wembley Stadium, The Hollywood Bowl, Radio City Music Hall, Pyramid Stage Glastonbury, Royal Albert Hall.

‘‘We’ve all come together for this show because of our deep shared love of Stevie’s music and the huge influence he has had on us all.’’ (Aleysha Lei - BV’s for TSWS and Grace Jones, Bryan Ferry)

‘’It’s a very special experience to play these songs with such an amazing band and to get so close to the sound, feel and spirit of the classic Stevie performances we all grew up listening to.’’ (Henry Collins - Horns for TSWS and Amy Winehouse, Tom Jones, Dionne Warwick)

This superbly rich musical and visual feast, with Philly style horns, a rhythm section including full percussion, and outstanding backing vocalists, will have you captivated, excited and dancing in the aisles to the songs and the soul of the Motown Legend.