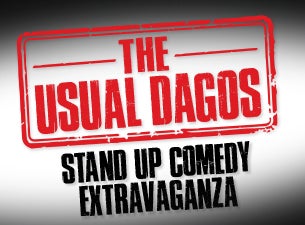 THE USUAL DAGOS brings you the most exciting and hilarious line-up of comedians seen on one stage for years! You will be transported back to your childhood days growing up in a European household, and how to fight the adversities every Dago and it’s dog (and non-Dagos) face today!

The show features a star-studded line up of ethnic comics including the hilarious Joel Avati; legendary comedian George Kapiniaris; and TV sensation, Tahir. Joining them on the big stage for the very first time will be James Liotta, Piero Viavattene, and a few ‘dagos that aren't dagos’ - Ashley Fils-Aime (direct from LA), and Dane Simpson who is from an Aboriginal background.

This show is sure to have you in stitches all night long with a plethora of new stand-up by the boys, impromptu jokes with the crowd, and just an all-round fun night. Tickets are strictly limited so book early to avoid missing out!