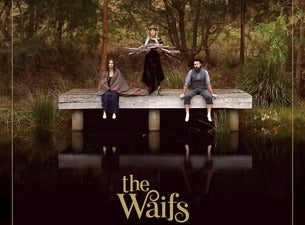 An Evening With The Waifs

“They’re a treat to witness live, with every slide and percussive tap adding dexterous depth…young and old alike left smiling, knowing they were included, with hearts full of love.” Stack Magazine

“It’s wonderful to see a band who have come so far down the road, with so much more left in the tank.” The West Australian

The Waifs soared into 2017, celebrating their 25th Anniversary in style. Releasing their eighth studio record, completing a sold out national tour, gaining their first ARIA #1 debut and reminding fans that like a bottle of fine wine, they only get better with time.

The original road warriors, The Waifs have built a career out of continually circling Australia and the globe. From bustling cities to the farthest regional and coastal towns, they have spent the past 25 years, reuniting with old friends, and gathering new fans, thanks to their enchanting live shows and affable natures.

Earlier this year, they made a promise to regional fans that they would return in November to play intimate shows in their cosy towns....so here we are, with three sneaky, small city shows in Sydney, Adelaide and Perth (with very limited tickets so get in fast).

13 shows everywhere from Ballarat to Grafton, Toowoomba to Young, Tamworth to Albany, and so many places in between. Tickets are on sale 9am local time Thursday October 26 from thewaifs.com