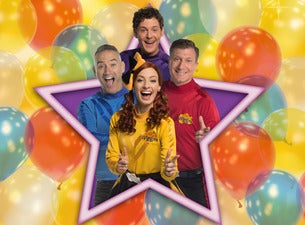 The Wiggles will explode onto stages all around Australia, when they bring their brand-new Party Time! Big Show! around the country this November, December & February! The Party Time! Big Show will feature all your favourite Wiggles songs such as ‘Do the Propeller!’, ‘E-M-M-A’, ‘Hot Potato’ and ‘Rock-a- Bye Your Bear’, as well as some hits from the upcoming Party Time! Album and more wiggly classics! Emma, Lachy, Simon and Anthony will be joined by Dorothy the Dinosaur, Captain Feathersword, Henry the Octopus and Wags the Dog as well as their brand-new Wiggly Friend; Shirley Shawn the Unicorn. You’ll also see the Wiggly Dancers, Santa Claus, dancing reindeers and much more!

Last year The Wiggles hit the headlines when a record 90,000 Big Show tickets were sold in the first 24 hours on sale! Seeing The Wiggles Big Show is an annual event for families across Australia. Parents, grandparents, aunties, uncles and carers don’t want to miss out on sharing this experience with their children. This year, The Wiggles have toured all around Australia as well as the US, Canada and New Zealand! The Party Time! Big Show will perform in Perth, Adelaide, Melbourne, Darwin, Hobart, Launceston, Canberra, Wollongong, Sydney, Newcastle and Brisbane!

In an exciting year, The Wiggles have soared to new heights. With broadcast already in over 190 countries, and Emma TV series 2 debuting, there will be exciting video specials and albums to look forward to! The new Party Time! album and video features so many varied styles of music perfect for any party! It features songs such as ‘Rattlin’ Bog’, ‘Simon Says’ (starring Simon Burke) and classic party songs like ‘Pass the Parcel’ and ‘Happy Birthday’.

The Wiggles have been entertaining children around the world for over 28 years. Blue Wiggle Anthony says, “It’s wonderful to see children who once saw The Wiggles are now bringing their children to see us perform!” Last year The Wiggles performed 330 shows in 150 locations to over 330,000 fans, making The Wiggles the most successful children’s entertainment group. The Party Time! Big Show! will get your tinsel-toes tapping, so come along and see Emma, Lachy, Simon, Anthony, Dorothy the Dinosaur, Wags the Dog, Henry the Octopus, Captain Feathersword, Shirley Shawn the Unicorn, Santa and his reindeers in their BIGGEST show yet! Buy your tickets soon as they’ll sell like… Hot Potatoes!

The Wiggles have recently celebrated 28 years of entertaining millions of fans across the globe. They now have more than 385,000 social media followers and have sold over 30 million CDs & DVDs and 8 million books. More than 70 CD and DVD releases later, The Wiggles have earned 18 x gold, 12 x platinum, 3 x double-platinum and 10 x multi-platinum awards for their music and DVD sales and have been awarded 13 x ARIA Awards for Best Children’s Album (making ARIA history as the most awarded ARIA winner in the one category, and being inducted into the ARIA Hall of Fame).