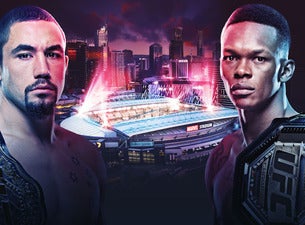 The Octagon® will make a historic return to Victoria on Sunday, October 6, with UFC® 243: WHITTAKER vs. ADESANYA booked for Melbourne’s Marvel Stadium.

In becoming the UFC middleweight champion, Western Sydney local Whittaker (20-4) defeated Cuban powerhouse  Yoel Romero twice – taking the win for the second time after breaking his hand in the first round.  UFC® 243 will mark the first title defense on home soil for Whittaker , fondly known amongst fans as Bobby Knuckles.

Across the ditch, Nigerian-born Auckland local and rising star Adesanya (17-0) remains undefeated. Having fought 6 times since his debut in February 2018, The Last Stylebender is not only one of the most active fighters in the division, but a fan favourite for his witty memes and anime-inspired performances.

With the Aussie champ back on the canvas following a fight-stopping injury earlier this year, the wait is finally over…the two gold strap owners will meet at the iconic Marvel Stadium on the October long weekend.

“This is the perfect fight at the perfect time with the two best athletes in the division,” said UFC President Dana White. “I am pumped to go back to Melbourne for this massive event. To have two champions in Whittaker and Adesanya fighting for the title on home turf is huge. This will be the biggest fight in Australian history.”

With clout of its own, Marvel Stadium holds the record for the largest MMA event in UFC history, with 56,214 in attendance at UFC® 193: ROUSEY vs. HOLM on November 15, 2015, featuring female pioneer and UFC Hall of Famer Ronda Rousey.

The heart-stopping main event that knocked Rousey from her reign was THE biggest sporting event of 2015, and nearly four years later, the unmissable UFC® 243: WHITTAKER vs. ADESANYA will be hot on its heels.

Marvel Stadium CEO, Michael Green said, “We are delighted to host UFC® 243 at Marvel Stadium. To host an international sporting event of this calibre is a great testament to the diversity and versatility of the stadium.”

Fans can register their interest to stay up to date and gain early access to ticket sales via ufc.com/Melbourne.