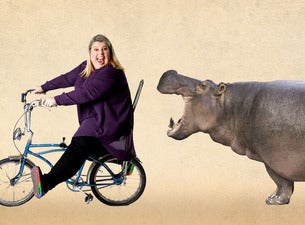 As seen on Have You Been Paying Attention?! & Netflix’s Comedians of the World

And she’s not finished yet.

Carlson is hitting the road again in 2020 with her brand new stand up show, Token Africa.

Africans have become the new must have accessory. Okay, not really, but everyone knows one, works with one or has a sister that’s dating one of us. What makes you African? Is it enough that you’re born there? Do you need to be able to dance? Why does being South African not register as African in most places? You’re thinking about it right now aren’t you? Questioning it. Africa changes people. People who visit to game reserves wear ranger outfits... why is that? We don't wear scrubs when going to the doctor... Africa puts things in perspective, this show will help you find that focus, delivered to you by a Token African.

2020 is hot on the heels of Carlson’s blistering 2019 which saw her NETFLIX debut as part of the streaming service’s unprecedented stand-up comedy event series. Urzila was one of 47 comedians handpicked from around the world. 2020 will see the release of her first solo full hour NETFLIX special, recorded in Melbourne in December. Urzila also cleaned up the Melbourne International Comedy Festival in 2019, taking out the MICF People’s Choice Award for most tickets sold across the festival.

Carlson is a much-loved series regular on Network Ten’s smash-hit panel show, Have You Been Paying Attention?! in Australia, as well as NZ’s new edition of the show. She was previously seen on NZ’s hit comedy panel TV show, 7 Days, and was a key cast member on fellow comedian Nazeem Hussain’s flagship show, Orange Is The New Brown in Australia in late 2018.

Urzila continues to sell out her seasons in Australia and NZ, and the awards stack up year after year. Most recently she was awarded the 2019 Rielly Comedy Award by the Variety Artists Club of NZ. In 2018 she was a nominee for Australia’s Helpmann Award for Best Comedy Performer, and she took out the 2017 Sydney Comedy Festival’s Director’s Choice Award. In NZ, Urzila has won the NZ Comedy Guild’s Best Female Comedian award six times, as well as the coveted People’s Choice Award at the NZ International Comedy Festival two years in a row.

Buy soon, buy quick. The proof is in the pudding. Carlson is a guaranteed sell-out. Catch her while you can.