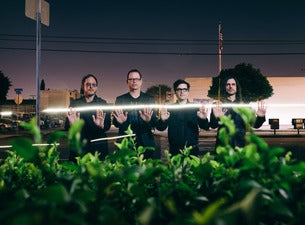 “Almost 15 years on it remains a stereo regular, and loved like the day it was delivered, awkwardly and self-consciously, into a world that didn't know what to do with it. And, largely, still doesn't. So give it a home, won't you; it could be your album of the year.” – BBC Music

After Weezer’s massive announcement that they were returning to Australian shores in January for the first time in sixteen years to play “The Blue Album” in full, fans were quick to request the same treatment for the band’s follow up Pinkerton. Chugg Entertainment are delighted to announce the addition of one Melbourne show which will feature Weezer playing Pinkerton from start to finish, along with a greatest hits set.

Weezer will be playing Pinkerton in full, as well as their greatest hits and rarities on Thursday 17 January at the Palais Theatre in Melbourne.

While the Californian band’s eponymous 1994 debut quickly announced the four young men to the world, their 1996 follow up took more time to propagate. Pinkerton eventually cemented itself as a seminal cult album that continues to influences musicians young and old. The deeply personal and fearlessly raw LP grew to be an unintentional cornerstone of the late-Nineties emo movement.

The intimate lyrics penned by Rivers Cuomo for Pinkerton served as a catalogue of heartache and loneliness, made painfully real in songs such as “Across the Sea”, featuring his correspondence with a distant Japanese fan. Fans the world over soon discovered that this record presented them with a sense of empathy rarely seen from artists. These fans went on to vote for the album as the 16th greatest album of all time in a 2002 Rolling Stone poll. The critics eventually concurred, with Pinkerton being inducted into the “Rolling Stone Hall of Fame.”

With Pinkerton taking on a life of its own and still as influential as ever, it’s little wonder that fans have shown the kind of positive reaction that would allow Weezer to add this very special show to their January tour of Australia and New Zealand.

This will be the final show added to the band’s first Australian tour since 1996. Be sure to not miss out on this chance to see Weezer in a more intimate setting.