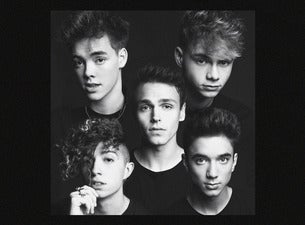 Why Don't We Tickets

About Why Don't We

With over ​2.85m YouTube subscribers, ​11 million+ monthly streams on Spotify and more than ​370 ​million audio and video streams globally of debut album ​8 Letters, ​Why Don’t We are the hottest pop outfit on the planet. The US five-piece are in the country right now to perform on Sunday night at the 61st annual Logie Awards... and we’ve got big news for fans!

Why Don’t We will make their eagerly anticipated return to Australian shores for their biggest shows yet – two massive dates, kicking off with their first ever Brisbane show on ​Sunday 24 November at ​The Fortitude Music Hall​, followed by Sydney’s Big Top Luna Park​ on ​Thursday 28 November​.

The five-piece will then make their first trip ever to New Zealand this spring, performing a headline show at ​Auckland’s Spark Arena on ​Friday 29 November​. Today the band also announced a new standalone single called ​‘Come To Brazil’​!

With the band’s previous Sydney and Melbourne shows selling out in minutes, this is the tour Australian and New Zealand fans have been waiting for! Why Don’t We’s North American and European ​8 Letters

​Tour dates have also been snapped up instantly… be sure to sign up for the Frontier Members Pre-sale ​here to get first access to tickets before they go on sale to the general public on ​Tuesday 9 July.