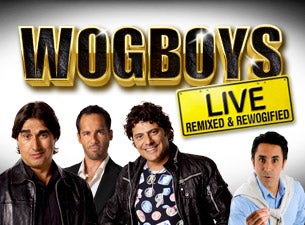 Due to huge demand Wogboys Live is back in MELBOURNE  at the  PRINCESS THEATRE  for 4 shows only on Friday March 7th 8pm, Saturday 8th March 7pm & 9:30pm & Sunday 9th March 5pm.

Hurry book now & don't miss out on seeing this hilarious comedy that has been playing to sold out houses in Melbourne throughout January!

WOGBOYS is the record breaking, critically acclaimed stage show that inspired the hit Aussie comedy film The Wog Boy. Set in the mid 90s, this hilarious and insightful play examines everyday situations in the lives of a group of Wogboys.

Tthe comedy hit of the year! Bigger and funnier than ever!!

*Recommended 15 years and over.

From Wednesday 8th January
at the Princess Theatre Melbourne

From Saturday 15th March
at the Tivoli Theatre, Brisbane

One of Australia’s most accomplished & adored comedians; Nick has excelled & transitioned with great success from stage to television to film & beyond.  A graduate of the Victorian College of the Arts, Nick essentially started the ‘wog’ phenomenon when he created & co-wrote the stage production Wogs Out of Work.  Nick also co-created the smash hit sit-com Acropolis Now.

His first feature film The Wog Boy broke Australian box office records. He followed that with The Wannabes co-starring Isla Fisher and then The Kings of Mykonos: Wog Boy 2, which would go on to become a major International box office hit. Collectively all of Nick’s films have grossed over $20 million at the Aust. Box office.

One of Australia’s most recognized actors with an extensive and successful career across theatre, television and film, Vince first came to the public’s attention in the feature films Street Hero & Moving Out. Vince has since gone on to appear in many more award winning films including; Walking On Water, The Nugget, Take Away, Opal Dreams. After landing a featured role in the internationally acclaimed film Chopper, he went on to win an AFI Award for Best Supporting Actor in 2002 for his performance in the feature film Lantana. In 2008 Vince starred in Underbelly one of the most successful Australian TV series ever. 2009 saw Vince star alongside Leonardo DiCaprio in Body Of Lies while in 2010 he appeared opposite Willem Dafoe & Ethan Hawke in Daybreakers.  That year also saw him reunite with Nick Giannopoulos in The Kings of Mykonos: Wog Boy 2.

Alex made his film debut playing the title role in breakout Australian feature film, The Heartbreak Kid. This was followed by an outstanding turn as the troubled "Ari" in Head On (Cannes Film Festival official selection) a performance that earned him an AFI Best Actor nomination in 1998 and a Film Critics’ Circle of Australia Award for Best Actor in 1999. He also received an AFI nomination in 2001 for his supporting role in the film, La Spagnola. Alex has also appeared in the films Three Blind Mice, Ghost Ship, Deuce Bigalow, Kings Of Mykonos, Summer Coda with Rachel Taylor, and recently completed filming on the soon to be released, The Infinite Man. Alex recently won the AACTA award for best actor in a TV series for his performance in The Slap.

Frank Lotito was destined to become a performer. From his early days as the class clown, to being discovered by a producer working as a waiter, destiny came knocking.

In 2011 Frank appeared in his first full-length feature film “Big Mamma’s Boy”, a laugh out loud comedy about life, love and lasagna, which he also wrote and produced. This lead to Frank producing his first US indie film in 2013. Shot entirely in New Orleans called the "Lookalike", starring Justin Long, Jerry O'Connell and John Corbett. Frank is currently working on his next film "The Cook & The Critic" scheduled to shoot in New York and Italy in 2014.

After Graduating with Honours from Flinders University (SA) and WAAPA, Hollie has worked consistently across all genres of performance.

Her stage credits include: The Ruby Sunrise, The Adventures of Snugglepot and Cuddlepie, Wrongturn at Lungfish, Hair!, The Last Five years, Music by the Moonlight concert series, Metro Street, Sing On Through Tomorrow and The Sapphires.

After being nominated for an AFI in the film Somersault, Hollie has appeared in numerous TV shows including: Supernova, Double The Fist, Double Take, Underbelly 'Badness' and she has just finished shooting as the new Roberta Williams in Fat Tony and Co.

Hollie has co-written and will co-direct/star in The Den (a Comedy/Horror feature) slated to shoot in April 2014 and a Feature drama 'Ebonny' to shoot later in the year.