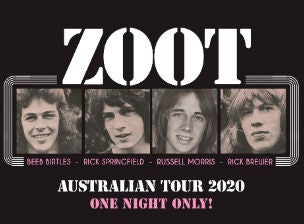 After ZOOT disbanded in 1971, Rick Springfield became a major star in the USA, Beeb Birtles was a founding member of Little River Band, and Rick Brewer joined The Ferrets.

ZOOT were crowned Australia’s Best Group in Go-Set in 1969 and had a string of hits, including ‘One Times, Two Times, Three Times, Four’, ‘Monty and Me’, ‘The Freak’, and the band’s blistering cover of The Beatles’ ‘Eleanor Rigby’. Russell Morris’s hits include “Sweet Sweet Love” and “The Real Thing”.

With such an array of stars on stage, expect some exciting surprises in the set list!