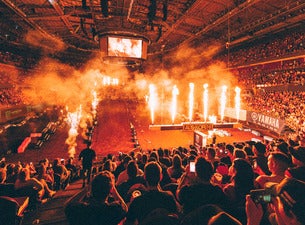 For the first time ever, in an incredible coup for sports fans, the AUS-X Open is set to run under the roof of the iconic Marvel Stadium, in what will be the largest international Supercross and action sports event ever held outside of the USA.

The Monster Energy AUS-X Open Melbourne promises to be the biggest off-road motorcycle racing and action sports event in Australian history, as the world’s best go head to head in Supercross racing and Freestyle Motocross, combined with Celebrity and Junior races, live music and performances, pyrotechnics and non-stop entertainment for all ages, providing incredible value for money on November 30.

This year will be the first time ever, an international Supercross event of this scale and magnitude will be held in Melbourne, featuring the world’s best riders going head-to-head on a world championship sized Supercross track and an amazing atmosphere with over 35,000 fans expected.

It will also be an engineering feat, arguably unmatched by any Supercross event in the world and certainly one of the most challenging in Australian history, as supports imported and constructed in the lower level carpark, prepare to handle the immense pressure of up to 6,000 tonnes of dirt, machinery and infrastructure, all positioned in the centre of Australia’s largest indoor stadium.

Outside the Marvel Stadium, fans will be treated to live music, stunning pyrotechnics, amazing entertainment and fun for all ages in the Monster Energy Pit Party, where ALL ticket holders will be able to get up close and personal with their favourite riders and access the international Supercross & FMX riders' Autograph signings.

For the first time ever the Yamaha Learn-to-Ride initiative will be located on the concourse outside Marvel Stadium and FREE for all ticket holders, 12 years of age and under. Young supercross fans are urged to jump on the latest Yamaha TTR-110 and PW-50 dirt-bikes and try out what it is like to ride these incredible machines, with professional experts on hand supervising and giving our future stars tips and advice.

The Yamaha Celebrity Race will feature the following celebrities all battling for celeb race glory: