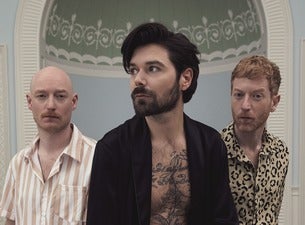 Known for their anthemic alt-rock, Scotland's Biffy Clyro are a dynamic power trio marked by the throaty lead-vocal brogue of singer/guitarist Simon Neil. Emerging in the early 2000s, Biffy Clyro drew loyal fans with their grunge, hardcore, and prog-rock-influenced sound that found them combining hooky choruses with unusual song forms and galloping rhythmic meters. While their early albums helped build their fan base in Britain, they broke through to an international audience with 2009's Only Revolutions, which peaked at number three on the U.K. album charts and earned a Mercury Prize nomination. The band continued to experiment, issuing the double-disc Opposites in 2013, and the soundtrack album Balance, Not Symmetry in 2019. In Australia, Biffy Clyro's most recent album - Ellipsis - debuted at #15 on the ARIA chart, their highest to date, and they have just announced they will be releasing their new album 'A Celebration Of Endings' on May 15.