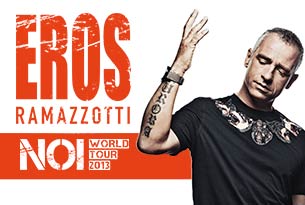 Eros first gained international success in 1993, with the release of Tutte storie, which amassed six million album sales and occupied the top five in every country already charmed by his undisputed talents. This critical and commercial success also led to numerous accolades including ‘International Male Artist of the Year’ at the Echo Awards, Goldene Kamera, Italian Music Awards, Telegatto Awards and World Music Awards.

US record company mogul Clive Davis was so seduced by Eros’ talent, Davis encouraged him to hold a concert at New York City’s Radio City Hall. The show was a sell out and Eros was the first Italian artist to grace the prestigious stage.

Italian superstar EROS RAMAZZOTTI mesmerised crowds when he delivered his debut Australian performances in 2008, demonstrating why he is one of Italy's greatest ever performers.