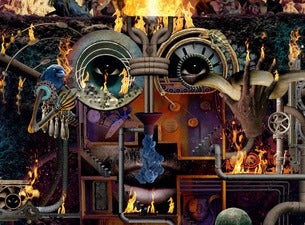 The Operatives are proud to present the exclusive first appearance of the globally-renowned, mind-bending Flying Lotus 3D experience across Australia and New Zealand, with a headline performance at MONA FOMA, in January 2020.

No stranger to Australiasian shores, the artist known by fans affectionately as FlyLo has toured his past five studio albums down-under, since he attended Red Bull Music Academy in Melbourne in 2006 and met some long-term collaborators in the cohort. Whether he’s covered in women’s bras at a secret Captain Murphy show, getting the ‘shoe’ at Meredith Music Festival, or blowing the curved-roof off the Sydney Opera House, FlyLo’s shows have been a much-talked about affair for anyone interested in experimental music and visual arts across the country. Fans new and old, this time, are invited to forget what they’ve seen or heard before — Flying Lotus 3D makes the extensive and first-of-it’s-kind stage show Layer 3 look simple.

Even the tech press has been floored, awarding the patented show 'Tech Enhancement of the Year' (Pollstar 2019). 3D Live, the creators of the tech touts the visuals viewable from 120 to 140 degree angles, meaning the holograms, usually flat for the cinema experience, can be seen from around a concert hall. Complimentary 3D glasses mean viewers can see music and a virtual world literally. collide — taking dancers into a kaleidoscope of pulsing colours, textures or imagery created by long-term collaborators Strangeloop and Timeboy. While the incarnation of the AV show has been performed for the past 2 years around the globe, and now is refined for his new album specifically — FlyLo is quick to point out that no night is ever the same, with both his music and visuals being improvised live by himself and the visual artists.

We don’t want to give away too much of what revellers can expect to see — but fans will know what they’re going to hear . Flying Lotus’ 2019 album, the fire-themed epic, “Flamagra ” . Following on from his Grammy-nominated LP “You’re Dead ” FlyLo’s sixth studio album has a dream cast of collaborators, the perfect foil for his jazz-influenced, dizzying beats. No less than Anderson .Paak, George Clinton, Little Dragon, Tierra Whack, Denzel Curry, Shabazz Palaces, Toro y Moi, and of course, Thundercat appear. Even David Lynch pops up for some spooky spoken word. It’s an album loaded with jam sessions of electro-funk with hip-hop intuition, and the propulsive energy of the music was crafted with his cinematic synesthesia in mind.

It's little wonder Flying Lotus ' music creates inspiration for some of the biggest artists in modern music — born Steven Ellison in Los Angeles, FlyLo is the grandson of Motown songwriter Marilyn McLeod and is the great-nephew of Alice Coltrane. He got his musical start crafting beats for Cartoon Network's Adult Swim channel before releasing his own productions on debut '1983', the producer and occasional rapper quickly gained a reputation for his unique take on dusty hip-hop beats ala Madlib, as unquantized as Dilla, with a signature sound all its own, dropping some of the most distinctive albums of the decade with complex electronic odyssey “ Cosmogramma ” and the Kendrick Lamar, Snoop Dog and Herbie Hancock collaborated record, “ You’re Dead!” . Releasing music on revered labels like Hyberdub, Ghostly International, Ninja Tune and Warp, and of course, his own imprint Brainfeeder . Never one to run out of creative energy, FlyLo stepped into his passion for cinema in 2017, writing and directing the Sundance-premiered horror-future flick, ‘ Kuso’.

In his first AU/NZ tour since 2015, FlyLo fans be warned — Flying Lotus 3D is coming. Fire is coming.