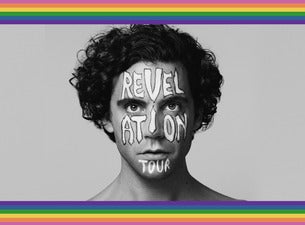 Frontier Touring today reveals that for his Revelation Tour, international pop sensation MIKA, will be joined by electro-pop dance artist Chela for his Australian East Coast dates and NZ-born, Sydney-residing pop singer Theia in Auckland. In just eight days time MIKA will make his New Zealand live debut followed by his return to Australia for the first time in 11 years. The tour is also in the wake of his fifth album My Name Is Michael Holbrook, described by Billboard as “his boldest record yet”.

MIKA will be joined by Australian/Filipino alternative pop artist Chela in Brisbane, Sydney and Melbourne. Chela’s inception into the alternative-pop scene was with her breakout single ‘Romanticise’ which has accrued more than 6.8 million combined streams to date. The Melbourne-based artist is no stranger to the stage, having previously performed for huge audiences at SXSW and Coachella festivals.

In Auckland, the Beirut-born performer will be supported by idiosyncratic pop artist Theia. Born in Christchurch, NZ and now making music in Sydney, Theia broke into the scene with her hit ‘Roam’ which has amassed more than 14 million combined streams to date. No stranger to the limelight, Theia has toured Australia, Asia and the United States and has previously opened for the likes of Tones and I, Sia, Broods, LEON and The Kite String Tangle.