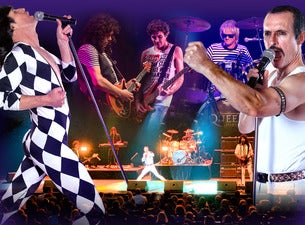 The essence of Queen is captured perfectly by QUEEN FOREVER fronted by a stunning portrayal of Freddie Mercury by the very popular Gareth Hill. Combined with Brian May’s unique guitar solos performed superbly by Scott Bastian, rich-sounding rock harmonies and authentic costumes, this highly entertaining stage show with state-of-the-art sound and lighting will blow you away.

Queen Forever will perform all of Queen’s biggest hits including Crazy Little Thing Called Love, Radio GaGa, We Will Rock You, We Are The Champions, You’re My Best Friend, Another One Bites The Dust, Fat Bottomed Girls, Don’t Stop Me Now, Somebody to Love, Killer Queen, and of course, Bohemian Rhapsody.

Queen Forever were established in Melbourne in 2006 and have been selling out concert halls and theatres all over Australia and overseas. This is a spectacular show not be missed. According to Queen fans, Queen Forever are the best lookalike and soundalike Queen show in the world.