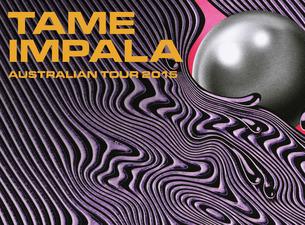 “Tame Impala's strafing with distorting shapes and mind bending diversions took out the enemy's resolve to resist as they became one with the music.”  Bernard Zuel, Sydney Morning Herald (on their Splendour In The Grass 2015 performance)

“Parker is perhaps the most prominent member of a class of young musicians that is creating some of today's most spectacularly catchy music by being backward-looking and forward-thinking at the same time.”  Rolling Stone (on Currents)

“In under an hour, Tame Impala's Currents sweeps you off your feet, transports you into a psychedelic dream, and returns you as a changed person -- and for the better.” The Huffington Post (on Currents)

Following an epic comeback show for their Australian fans at Splendour In The Grass in July, festival favourites, Tame Impala, quickly reminded fans that the wait to see them return to the live stage has been well worth it.

In the wake of this widely chronicled performance, Laneway Presents can confirm that the global triumph will return to Australia for a national tour at the end of the year.  The tour begins on Saturday 7th November at Melbourne’s Sidney Myer Music Bowl, then a very special performance at the Sydney Opera House Forecourt on Wednesday 11th November, before heading to Perth’s Belvoir Amphitheatre on Saturday 14th November, the Thebarton Theatre in Adelaide on Wednesday 18th November and then winding things up at the Brisbane Riverstage on Saturday 21st November.

This news comes in the wake of the release of one of 2015’s most highly anticipated album releases; the band’s third studio offering, Currents.  On it, frontman, writer, performer and producer, Kevin Parker, addresses a blindingly colourful panorama of transition in the most audacious, adventurous fashion he’s yet to capture on record.  Dense with heady lyrical introspection, musically the most playful, bold and varied Tame Impala record to date, Currents is Parker putting down his weapons and embracing change as the only constant  - sonically, thematically, and personally.

Tame Impala are Kevin Parker, Dominic Simper, Jay Watson, Julien Barbagello and Cam Avery. Loosely formed in 2007 from a collection of Perth bands, with some changes in members and configurations along the way.  Tame Impala’s first release, a self-titled EP, debuted in 2008, followed by their first album Innerspeaker in 2010.  The second, often feared but sublimely successful long-player Lonerism  was released in 2012.  They’ve been touring to support ever since.

This latest album campaign for Currents has seen these Perth-natives escalate their stature to a universal level, accruing accolades and adulation as an international act from critics, fellow musicians, and most importantly their ever-expanding fan base.  With headlining slots at Coachella and Governors Ball earlier this year, the fervent anticipation around the albums July release was heralded with a #1 debut on the ARIA charts.  Receiving critical acclaim across the board, The Quietus said, “What they are, on Currents - their third album, and the first since Lonerism brought them deserved renown three years ago - is something fluid, delicate and magical. They've looked upwards. They've gone forwards.”  and DIY stating that “Currents dives off into bold and optimistic new waters.”

TICKETS FOR ALL SHOWS GO ON SALE MONDAY 31 AUGUST, 9AM (LOCAL TIME)