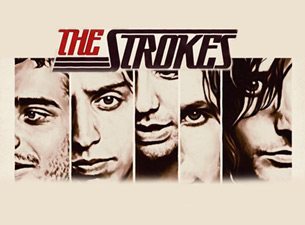 THE STROKES IN CONCERT:

American rockers the Strokes have been wowing audiences with their infectious hooks and post-punk influenced sound ever since breaking out in 2001 with Is This It. At the group's acclaimed live shows frontman Julian Casablancas showcases his distinct vocals on favorites like "Reptilia" and "Last Nite" while his bandmates keep pace with edgy guitar riffs, thumping basslines, and pounding drum patterns. With a decade-spanning collection of popular anthems at the ready, the Strokes always have fans singing along to their energetic sets on their can't-miss tours.

New York City-based indie act the Strokes formed in 1998 and began playing local shows at popular venues in the area. They earned attention from major label execs after gaining widespread popularity for their intense live shows and with the release of their 2001 EP The Modern Age. They released their debut full-length album Is This It that same year, receiving universal acclaim from critics and fans and landing on Rolling Stone's Top 10 Debuts of All Time list. The five-piece has has continued to rule the charts with four more Top 10 albums over the course of the last decade, earning numerous awards and accolades in the process. They've become one of the most iconic rock acts of the era thanks to their collection of indie jams, and fans can experience their first-rate showmanship on full display every time they tour.

"When The Strokes came out, everything was just so perfect. Julian Casablancas is literally the best frontman ever. He went into the audience twice! Also, Fab, Nick, Nikolai, and Albert are so talented."

"It was really good. They sound just like they do on the albums, and often times songs sound even better. Even "You're So Right" sounded great. They weren't stiff or boring, they were far from it."

"This show was absolutely amazing! One of the best -- if not the best -- concerts I've ever seen. The Strokes were fantastic! "