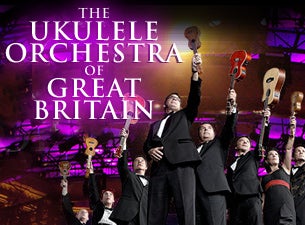 About The Ukulele Orchestra of Great Britain

Returning to Australia by Public Demand!

Continuing their world tour and sold out concerts in New York, London and Sydney, the exceptional Ukulele Orchestra of Great Britain are coming back to Australia with their funny, stomping, toe tapping, all singing, all plucking obituary of rock and roll and melodious light entertainment.

They believe that all genres of music are available for reinterpretation, as long as they are played on their instruments bought with loose change – ukuleles! Their new show will be an entertaining white-knuckle ride between twisted covers including Lady Gaga, Adele, Junior Walker, Black Sabbath and Michael Jackson, along with triumphant war-horses and poignant lollipops of classical music and, some surprising original and quirky pieces which defy classification. With an engaging mix that is at times equal parts physical comedy and artistic virtuosity, the orchestra uses only the ukulele – the celebrated ‘bonsai guitar”.

You will be hooked from the first chord by the wonderful effect when 8 ukuleles come together and are played at their best by world-acclaimed, highly skilled performers with a dollop of typically British humour.
Grab your friends and family and enjoy a night out like no other with the band that the New York Times recently named as one of the ‘five best concerts of the year’.

I can’t remember the last time I was so disarmed by such a thoroughly enjoyable evening of music. Australian Stage Sydney 2012

The Ukulele Orchestra of Great Britain’s musicality and musicology are unquestionable, as is their sense of fun. Together it’s a winning combination for a night which turns music you know on its head, redefines lyrical slants and makes you want to take up the ukulele. West Australian Perth 2012