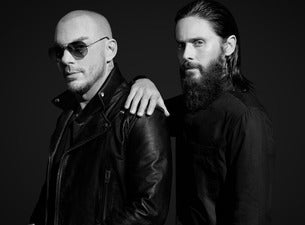 About Thirty Seconds To Mars

Frontier Touring can confirm that joining Thirty Seconds To Mars on their epic forthcoming Australian arena tour in March 2014 will be princes of post-punk, White Lies!

White Lies exploded into the musical stratosphere with their debut album To Lose My Life in 2009, which climbed to #1 on the UK Albums Chart, selling nearly a million copies worldwide and saw the trio win ‘New Band of the Year’ at both the Mojo & Q Awards. They quickly became a festival favourite, appearing alongside the likes of Coldplay, Muse and Kings Of Leon at Coachella, Glastonbury, Lollapalooza and South By Southwest to name but a few.

The Frontier Touring Company has confirmed that warriors of progressive metal Thirty Seconds To Mars will be unleashed into Australian arenas for blockbuster performances in Perth, Sydney, and Brisbane!

Thirty Seconds To Mars Australian shows in March 2014 are set some of the most anticipated performances of the year; the band are armed to the teeth with an artillery of anthemic hits from their back catalogue and recent fourth album Love Lust Faith + Dreams (out now through Universal Music) that were born to be played in an arena. The band continue their chart-scorching trend with hit new single ‘City Of Angels’, an epic, rousing and personal track that explores the places we call home and how they bring us to life, as Leto himself said “A place where you go to realize yourself and your dreams”.

Produced by Leto himself along with previous collaborator Steve Lillywhite (U2, The Rolling Stones, The Smiths), the new album promises to be their most exhilarating to date. Leto told BBC Radio 1’s Zane Lowe that it’s a “complete transformation for us... stronger, better and more evolved”.

No strangers to innovation, in partnership with NASA the band literally launched first single ‘Up In The Air’ into space for an ‘out of this world’ premiere 230 miles above the Earth. The track was carried aboard the SpaceX rocket and received its first ever play on the International Space Station.

It’s undeniable; their epic and atmospheric sounds combined with meditative almost spiritual lyrics have fashioned songs that were born to be performed in the arena.

Having already blown Australian audiences away with sold out theatre tours in 2007 and again wowing audiences across the country in 2010, the guys are primed to conquer our arenas for the very first time this August.

‘...definitely a celebration, in just about every conceivable way.’ - MTV

Thirty Seconds To Mars was initially founded in 1998 as a family project between brothers and multi instrumentalists Shannon and Jared, later being joined by lead guitarist, violinist and keyboardist Tomo Miličević.

After impressing with their self titled debut, it was sophomore album A Beautiful Lie that cemented their position as pioneers of epic and anthemic music.

Its follow up third studio album This Is War was arguably their finest work to date, going multi platinum throughout Europe, #2 on the U.S. Alternative Albums and Digital Albums charts and triumphant single ‘Kings and Queens’ becoming 2009’s most celebrated anthem.

On stage the band is a force of nature, Leto’s captivating showmanship and the band’s skillful execution leaving little doubt why their fans - named ‘The Echelon’ after one of their songs - are so devout. On their last tour, the band even broke a Guinness World Record for longest ever concert tour after performing an astonishing 311 shows over two years in almost 60 countries in 6 continents.

Having sold over five million albums, amassing more than 300 million views on YouTube and with a new album on the horizon, it’s a safe bet that the Thirty Seconds To Mars Australian arena tour will be one of the most electrifying events of the year.