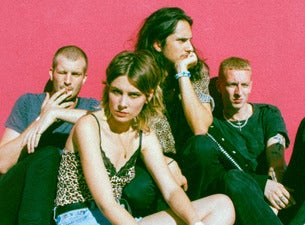 ‘Wolf Alice are not just another indie band’. NME’s statement about the North London quartet is a simple one, but it captures the powerful waves they’re making both in studio and live. Frontier Touring are thrilled to announce that they will return to Australia and New Zealand this September to perform headline shows with plenty of bite!

The band’s roots go back to 2010, when vocalist Ellie Roswell and guitarist Joff Oddie came together to make tunes inflected with a mix of folk, grunge and vintage ‘90s indie rock. Joel Amey (drums) and Theo Ellis (bassist) completed the group a few years later, culminating in the release of their debut EP Blush.

That momentum continued with the group’s debut album My Love is Cool (2015), a critical and commercial success. The gold-certified release hit #2 on the UK charts, garnered multiple nominations including the Mercury Prize and Grammys, and led to the band claiming the NME Award for Best Live Band.

Last year’s second record Visions of a Life, recorded in Los Angeles, took things to new heights on stellar tracks including the slow-burning ‘Don’t Delete The Kisses’, and ‘Beautifully Unconventional’ with its beast of a groove. Fittingly describing the album but also apt for the band’s power onstage, Rolling Stone asserted ‘The stakes are high, and the payoffs are real.’

Live is where Wolf Alice’s combination of bite and beauty is most strongly felt. Having extensively toured with English rock mainstays The 1975 and supported names such as Queens Of The Stone Age and Liam Gallagher, the powerhouse quartet have dominated headline shows across the UK, the US, Australia, Japan and Europe.

They’ve found something of another home down here, smashing Falls Festival in 2014, Splendour the following year – including a pair of rip-roaring Sydney and Melbourne sideshows – and 2018’s Laneway.

‘With a reputation for a ferocious live performance, Wolf Alice stuck an exclamation mark on a tour that has seen them scoring universally positive reviews. Ellie Rowsell is clearly the jewel in the band's crown, her stellar voice and magnetic presence reason enough to watch.’ – The Music

‘Yes, the quartet can certainly howl and roar, as they do on the chaotic ‘Yuk Foo’ and the deadest punk of ‘Space & Time’, but amongst the shredding and noise they can’t disguise their inclination for sweet melody and atmosphere that makes some of their most cohesive songs, like ‘You’re A Germ’ and ‘Bros.’, stand out for their blend of ferocity and finesse.’ – triple j

In amongst all this, Wolf Alice have contributed to iconic soundtracks including 2016’s Ghostbusters and T2 Trainspotting. If there’s a soundtrack though that’s simple yet dynamic, brash yet beautiful, it’s the one that the band have been carving out for themselves. You won’t want to miss out on these guys when they hit our shores again for this latest headline run!