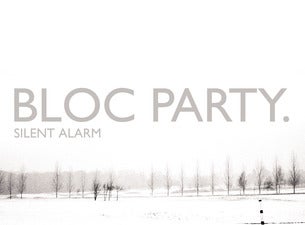 Back  in  2004,  Bloc  Party  were  four  Londoners  emerging  into  a  post-Strokes  world  buzzing  with  a  newly  discovered  love  of  angular  guitars.  Lead  by  the  compelling,  impassioned  yelp  of  Kele  Okereke  and  his  stunning  descriptions  of  love,  helplessness  and  life  in  the  early  aughts,  they  drove  centimetre  perfect  incisions  into  the  bedrock  of  indie  song-craft.

The  record  was  an  immediate  hit  as  it  burned  up  the  English  and  American  album  charts,  inspiring  breathless  reviews  wherever  it  was  heard.

Singles  ͚Banquet͛,  ͚Helicopter͛and  the  aforementioned  ͚Positive  Tension͛put  Bloc  Party͛s  technicolour  ambitions  on  dazzling  display  as  they  joined  bands  like  Arctic  Monkeys  and  Franz  Ferdinand  in  ushering  in  a  new  generation  of  English  guitar  bands  to  the  world.