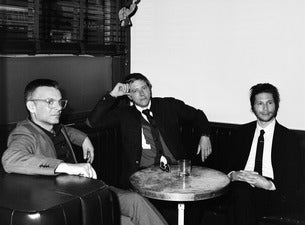 Over the past five years the four dapper dons of Interpol have jumped from being New York local favorites to a globally respected band. They've accomplished this feat with a hardnosed work ethic - treading the boards of hundreds of venues, from Tampa to Tokyo - a flair for the dramatic, and two rapturously received albums of dark and deeply melodic rock (2002's Turn On the Bright Lights and 2004's Antics). They've graced magazine covers, inspired countless imitators, earned themselves Short List Award nominations, and enjoyed a rare kind of commercial success that has not once infringed on their effortless enigmatic quality. Every step they took seemed gradual, organic, and wildly successful. So why does album #3, the epic Our Love to Admire, feel like the start of something new? Blame vacation, for starters.

"After our last tour for Antics we took three months off for the first time since the first record," explains guitarist Daniel Kessler. "And when we reconvened, everything had changed. It was electrifying. We had to start all over again." Turn On the Bright Lights had been the culmination of four years of under-the-radar toil while Antics had been composed in the band's New York City rehearsal space between tours. After taking those few months to exhale in early 2006, for the first time Interpol gathered in Manhattan with a blank slate. Needless to say, that didn't last long. On day one, Daniel unveiled an upbeat, pogo-ing riff that, once vocalist Paul Banks, bassist Carlos D. and drummer Sam Fogarino got their teeth into it, coalesced into the album's eventual first single, the catchy kiss-off, "The Heinrich Maneuver" (which, in true New Yorker fashion, sneers at "things on the West Coast").

Changing gears almost immediately, the band next birthed the eventual album opener, the haunting and elegiac "Pioneer to the Falls," true to the tradition of hyper-atmospheric and sprawlingly brilliant first tracks, the song sets the album's tone perfectly. Its thick, gauzy mood comes mostly from keyboards - not the band's trademark guitars - and this too was intentional. For the first time the band wrote with keyboards from the beginning and let them influence the songs. With no agendas as to what they could or couldn't do they found themselves able to create an album in a more fluid way than ever before.

Although they are renowned for producing their own albums, as the songs began to stockpile, the band chose to work with noted producer and mixer Rich Costey to co-produce. They clicked immediately, with Costey automatically understanding their language and able to help them expand the sound of the new songs. It seems slightly shocking that a band as linked to its hometown, so ingrained as Interpol is to New York City, had never actually recorded in Manhattan. The decision was made to remedy that for Our Love to Admire, which was laid down at Electric Lady studios in the West Village. The two earlier records had been recorded in a house in Connecticut where the band lived and worked in the same space, the claustrophobia working well for the music but undoubtedly providing a certain amount of stress. The new record, recorded so close to home made, everything a little more healthy. "It was incredibly soothing to walk out of the studio into the city and forget about the record for the night." That said, the city which spawned them was clearly inspiring them as never before.

Our Love To Admire is at once unmistakably Interpol and undeniably new. The witty and perverse "No I In Threesome" is an upbeat ode to shaking up a staid relationship propelled by Carlos D's peerless bass melody while the tenderly observant "Pace Is the Trick" proves that the band are still the masters of the dramatic - check the painful pause right before the sinfully satisfying return of Sam's thundering drums and Daniel's ringing lead guitar. The band's impressively seductive evolution is obvious all over the record, but never more so than on tracks like "Mammoth", "Who Do You Think" and on the album's lyrical centerpiece, the ghostly "Rest My Chemistry". While Daniel is understandably proud of the song he cautions against reading too much autobiography into its lyrics. "We always leave the interpretation to the listener," he says. "I mean, you shouldn't watch a movie for the first time listening to the director's commentary!"

Our Love to Admire closes with "The Lighthouse," a funereal dirge that is among the most unexpected and memorable songs ever recorded by the band. Almost entirely percussion-free, the song is constructed around Daniel's mournful guitar and Paul's sparten lyrics. Not only is it one of their finest moments to date, it provides the album's most goose-bump inducing moment, the very same reflex shivers that make Interpol live shows such an exhilarating experience. As the very last song the band recorded for the album it was, they say, the hardest to play. The hypnotic guitar part was played on a 50-year-old guitar that had toxins on the strings, providing Daniel with a blistering and painful sensation in his fingers. The band weren't even sure the track would make it out of the studio, but once they heard Paul's remarkable vocals they were floored. The song - and the album - doesn't so much end as it bleeds to a close with a long, echoey coda filled with feedback and strings. A fittingly dramatic end to a stunning and emotional journey. Interpol is back, every bit as good as before but charged with a new spirit, a new direction, a new label and, most of all, a new confidence.