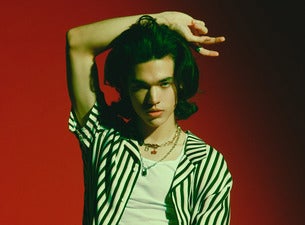 A bold pop Prince with lashings of moves, hooks and melodies, Conan Gray will celebrate the release of his upcoming debut album Kid Krow by jetting into Australia for three special East Coast shows later this year.

Locking in dates in Brisbane, Melbourne and Sydney as his brigade of all ages fans anticipate his every move, this Texas-born, Japan-reared, California-raised revelation will revel in displaying the modernist pop nuggets that have seen him clock up millions of streams and landed him on stage at Late Night with Seth Meyers and on tour with like-minded legends Panic! At the Disco.

Tracks like his breakout single ‘Idle Town’, smooth miracle ‘Crush Culture’ and the dance-tastic ‘Maniac’ showcase Gray’s keen knack for holding up a glitter covered mirror to a generation growing up hyper-aware of their unique position in modern pop culture.

Discovering music very young as an escape from a turbulent family life lived across cities and continents, Gray first started posting his thoughts and songs on YouTube while still in high school.

His channel, ConanXCanon, captured his experimentations with melody, dance, make-up, shopping or whatever else took his kaleidoscopic desire as he navigated life as a Texan teenager.

“I truly grew up on the internet,” Gray says, “I was a very lonely kid, I moved around a tonne so I didn’t have very many friends, so any social interaction of mine happened on the Internet.”

This social interaction quickly gave way to musical saturation as his deft song writing skills and gentle, affecting voice began to garner attention. Eventually (inevitably) he went viral with Idle Town and its gorgeously relatable video which chronicled the end of high school and the loss of innocence and adolescence.

The song gained over 50 million streams on Spotify and 15 million views on YouTube, planting a very noticeable Conan Gray flag on planet up-and-coming.

Since that first blush of recognition, Gray has moved from strength to strength as he develops a direct connection with his audience and fosters devotion wherever he goes.

As he readies Kid Krow for release in March this year and with single ‘The Story’ already ubiquitous, the young man described by Paper Magazine as a “venue packing-pop powerhouse” will arrive in Australia as one of the most talked about new artists of 2020.