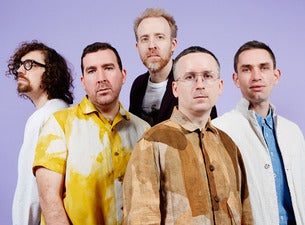 Arriving with a reputation for sonic wizardry cultivated through nearly two decades of marvellously consistent output, Hot Chip have always had an ability to charm all who stand before them.

A Bath Full of Ecstasy, their seventh studio album, builds on this reputation as it racks up some of the best reviews of their career. Singles such as ‘Hungry Child’ and ‘Melody of Love’ crystallise a celebrated sound as the five-piece bridge a sense of euphoria and melancholy with colourful melodies and inspired vocal transmissions.

The one-two punch of synth master Joe Goddard and inimitable vocalist Alexis Taylor, so recognizable from the band’s untouchable back catalogue of gems (‘Over and Over’, ‘Ready for The Floor’, ‘One Life Stand’, ‘Boy from School’ etc) is on dazzling display throughout.

Kicking things into an extra gear this time around though, was the production nous of Philippe Zdar (the French maestro behind the likes of Cassius and Phoenix) and Rodaidh McDonald (the Scot responsible for the best of The xx, David Byrne and Sampha, among others).