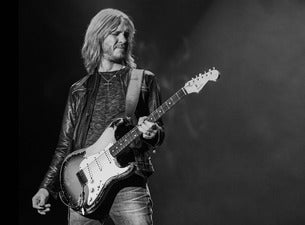 Guitar god Kenny Wayne Shepherd is one of the fiercest young axmen of his generation, and he continues to blow audiences away every time he takes the stage. The self-taught virtuoso is a sight to behold in concert, where his furious fingers and flailing blonde locks serve as the perfect counterpoint to the precision and ease of his razor-sharp riffs. Whether he's playing bluesy originals from 2014's Goin' Home or covering legends like Bob Dylan and Jimi Hendrix, Shepherd always treats fans to electrifying performances that are as heavy on pure gusto as they are on musical chops.

Shreveport, Louisiana-born Kenny Wayne Shepherd got his first guitar in early childhood and began learning the instrument with a unique self-taught method. He was quickly recognized as a guitar prodigy, and at age 13 he was invited to play on stage with blues icon Bryan Lee. His first performance at the Red River Revel Arts Festival in Shreveport attracted the eye of label execs, and before long Shepherd had signed a multiple record deal with Giant Records. His 1995 debut album Leadbetter Heights topped the blues chart, a feat he repeated with five subsequent albums including his 1997 sophomore album Trouble Is... -- the longest-running album on the Billboard Blues Chart in history.  In 2014 Shepherd released his seventh studio album Goin' Home, another chart-topper that has fans eagerly awaiting his next must-see series of tour dates.

"I have seen Kenny Wayne numerous times and this was his best show yet. See him if you can!"

"Awesome show!!! Would definitely pay to see them again! He punished that guitar!"

"Kenny Wayne Shepherd and his band rocked the blues. What great musicians. His closing act of Jimmy Hendrix's 'Voodoo Child' was awesome."