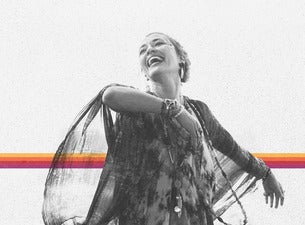 A performance by singer/songwriter Lauren Daigle might leave you feeling something more spiritual than you get from your average pop performance, but it's not just because she's one of the biggest contemporary Christian artists around. It's because the feeling behind her songs seems to fill her with so much energy that it's impossible for her not to let that spirit flow directly to her fans. From the success of her first hit, 2014's "How Can It Be," she's forged a special bond with Christian pop audiences. And as her popularity quickly grew by leaps and bounds over the next couple of years with the ‘How Can It Be' album, 2016's "Trust in You" single, and the mainstream breakthrough of her 2018 album ‘Look Up Child,' the scale of her performances has grown accordingly. From her first tour in 2016, the sold-out A Night With Lauren Daigle, to her 2018/19 Look Up Child tour and the 2018 Behold Christmas tour, Daigle puts the message of her music out in a way that draws even secular fans into her pop-friendly sound.

Christian pop star Lauren Daigle hails from Lafayette, Louisiana, where her earliest musical experiences came from singing with her local choir. Before venturing out on her own, she sang with other Christian artists, like Jason Gray and The Assemble. Centricity Music was stunned by the young singer/songwriter's talent and put her song "Light of the World" on a 2013 Christmas compilation album. By the following year she stepped out on her own, and her debut single for Centricity, "How Can It Be," became a smash on the Christian charts, ultimately going Gold. In 2015, her debut album for Centricity, also titled ‘How Can It Be,' went to the top spot on the Christian charts and soon listeners were likening Daigle to such pop icons as Adele, on account of her larger-than-life voice and panoramic pop production style. A string of No. 1 Christian singles followed, like "Trust in You," "Back to God" (featuring Reba McEntire), and "You Say." Along the way, Daigle racked up a boatload of GMA Dove Awards just in the first couple of years of her recording career, as well as earning a pair of Grammy nominations.