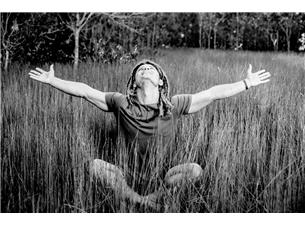 Over the course of Ash's career he's developed for himself a unique place in the Australian music setting. His undeniable foundations in traditional blues music have meant that he's been able to explore all kinds of musical burroughs without ever diluting his blues bent nor his credibility.  Ash has worked with Count Bounce, t.z.u, Mr Trials, Funk Oars, Kram and Urthboy. He's played on a Pete Murray single and had Rob Hurst, Vika and Lynda Bull, Chris Wilson and Ian collard on stage as part of his band.  He even did a song with Joe Camallirri once for the ABC. Last year he unashamedly unleashed the rock beast with Scott and Andy from The Living End on their collaborative album GARGANTUA, throwing the final match that’s turned his creative flame into a raging bonfire. Writing, demoing, rehearsing and just plain ol' jamming like never before, Ash Grunwald has come back full circle; to the durgy, stomping solo blues that made him famous as a young, authentic blues musician thundering his way into the hearts of his generation some 10 years ago.

To the highways of America Ash took his soul on fire with good friend Xavier Rudd over the past month, it's glow reflected in the eyes and hearts of US audiences show after show. It even managed to warm the cockles of industry folk, with fantastic reviews rolling out and a signing to the famed US based Agency Group (Bad Brains, Blackalicious, Dead Kennedys, Gary Numan, The Pogues, Lauryn Hill, Xavier Rudd).
"Grunwald’s blend of blues is entirely different than what you might find in a small club here in Nashville; .... it was easy to tell that the audience immediately picked up on the fact that this wasn’t just any blues musician." - No Country For New Nashville

n a genre where it can be difficult to differentiate yourself, Grunwald manages to set himself apart with his high-octane electric guitar work, supported by three foot pedals to provide a touch of percussion, highlighted by a vibrant persona that surely won over a few new fans. - Nashville Grit

Grunwald is finally set to carve out a niche for himself in the American music scene. With heavy riffs, a throaty voice and deeply American-blues influenced sound, crowds across the United States will surely embrace Grunwald. - 303 Magazine.

And now Ash can't....wait....to bring it home!
Back on the stomp box, a man who needs little amplification and zero bells and whistles to get the whole joint jumpin'!!