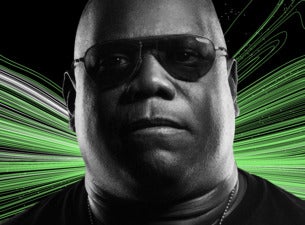 Musical ambassador, professional DJ, Veteran of acid house and a champion of techno – you name it, Carl's been there and done it - never losing sight of his passions – playing music, breaking tunes, spreading love and celebrating life.

From his record company INTEC DIGITAL, releasing some of the biggest names in techno, to his first ever iPhone App to his record breaking Global radio show, reaching over 12 million listeners worldwide, to his nonstop touring around the world all year, every year - in venues across USA, South America, Europe, the Far East, and Australia to his most successful IBIZA season to date, with the Revolution Continues, his 10th consecutive year at Space, CARL COX shows no signs of slowing down, still one of the world’s Global DJ Superstars.

“The label couldn’t be going better,” says Carl. “It’s great to be back at the helm discovering underground DJs.”

As a founder of the sound, Carl rode the exploding British rave scene.

Now marking a change in direction from traditional Ibiza parties, Carl and his Space revolution has always been acclaimed for its adventurous and forward-thinking line-ups, musical direction and state of the art production.

This, along with Carl’s highly involved and passionate role as promoter, programmer and host, is why each year has seen a growth and progression from the last, both in terms of quality and size.

“After the Ibiza seasons, after the festivals I’ve done, after my own events, albums and remixing,” says Carl, “the story still continues in a massive way – there’s so much more still to come.”